The architecture of Hallgrimskirkja church is inspired by natural lava formations. It took 40 years to complete this imposing structure. Besides unusual architecture the church offers dramatic panorama of the greater Reykjaví­k area and out to Reykjanes peninsula as far as the eye can see.

The Hallgrí­mskirkja is a Lutheran (Church of Iceland) parish church in Reykjavík, Iceland. The church is prominent above the street Skólavörðustígur and due to its size may be said to have become one of the city's landmarks.

The church houses a large pipe organ by the German organ builder Johannes Klais of Bonn. It has mechanical action, four manuals and pedal, 102 ranks, 72 stops and 5275 pipes. The church is also used as an observation tower. An observer can take a lift up to the viewing deck and view Reykjaví­k and the surrounding mountains.

The statue of explorer Leif Eriksson (c. 970 - c. 1020) It was a gift from the United States in honour of the 1930 Alþingi Millennial Festival, commemorating the 1000th anniversary of Iceland's parliament at Þingvellir in 930 AD 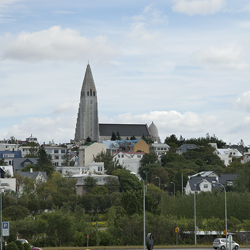