King Christian IX Ruled Denmark from 1863 to 1906, known as “The Grandfather of Europe” with so many of his descendant’s becoming royalty. In 1874 he issued a new constitution for Iceland, a compromise between Iceland’s demand for maximum political autonomy and Danish interest in maintaining the monarchy. On this occasion the King visited Iceland in what was the first ever royal visit to Iceland. 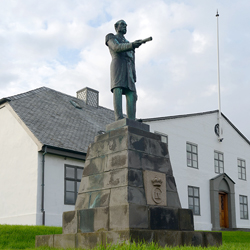